How much untested GE food do you want on your plate? 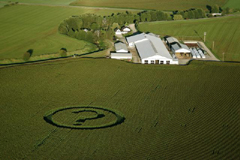 A consultation paper produced by Agriculture Canada could allow genetically engineered (GE) foods that have not been tested or authorized in Canada into our food system. The proposal for what the government calls “low-level presence” of GE foods would effectively legalize contamination of Canadian food. The consultation paper offers three proposals about how Canada should deal with small amounts of GE foods that are accidentally imported from other countries. All these proposals would lower safety and environmental standards compared to our current zero tolerance approach to untested GE foods.

Canada likes to claim that its food policy is based on science. However, the plan is being touted as an opportunity to “redefine zero”. According to one version proposed in the consultation document, a level of 0.1% (or possibly higher) would be effectively treated as the same as zero for the purposes of contamination levels. How scientific is it to redefine zero? Remember that we are talking about foods that have not been tested, so we do not know what their effects at any level are.

The proposed approaches to low level presence would also send offshore our expertise and decision making on food safety. In hopes of minimizing trade disruptions, food sovereignty in Canada will be compromised. Canada will accept the authorizations of other countries as sufficient for guaranteeing the health of Canadians. Canadians elect a government in Ottawa, not to see it blindly accept whatever is decided as safe in Beijing or Washington. Low level presence will lead to acceptance of the lowest common denominator in the global food system.

It is clear that the impetus for this new policy comes not from concern for the safety of Canadians or the environment, but from concern for the profits of export companies. GE contamination of Manitoba’s flax exports in 2009 led to an industry shut down as markets in Europe refused to accept Canada’s contaminated flax. Since then, many farmers, consumers and citizens have concluded that we must be more careful and more stringent about what GE crops we approve in Canada to prevent this kind of incident in the future. A private members bill earlier this year would have done that by requiring that new GE crops be subject to an economic assessment. Unfortunately, Bill C-474 died on the Senate floor.

Rather than looking at ways to prevent contamination by untested crops, the Canadian government has chosen a way forward that will greatly increase contamination. Their reasoning is that unless Canada allows untested food into our market, why would the Europeans accept contamination in theirs? “Well, you can’t point at anyone else when your own standard is zero.” agriculture minister Gerry Ritz told AGCanada.com last month. Unfortunately, the reverse may be more likely. Canadian exports may suffer if Canada leads the race to the bottom in food safety and our trading partners increasingly question what is in the food we are trying to sell.

More information about low level presence, including copies of the consultation document and sample letters to send to Agriculture Canada are available at www.cban.ca.  Agriculture Canada will be accepting comments until November 25.