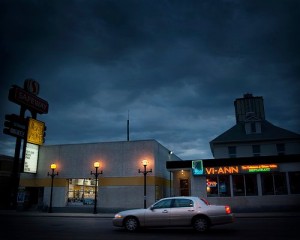 Osborne Village residents are highly concerned about the proposed expansion to Shoppers Drug Mart. The expansion would see the current store size of 10,000 sq ft, expand to 23, 000 sq ft with the retailer purchasing two adjacent properties which currently house Vi- Ann Restaurant and Movie Village. After an open house held by the consultants MMM Group, many residents of the neighbourhood felt this expansion would be of detriment to the neighbourhood and have started a petition campaign to help stop the proposal from going ahead. Protecting Vi-Ann Restaurant has been the main focus of residents’ efforts, the family that owns Vi-Ann rents their property from the owner of Movie Village and had no idea any of this was taking place. Bac Bui, owner of Vi-Ann has built the local business for over 10 years, has invested tens of thousands of dollars, and is devastated after hearing the news from a customer the day of MMM group’s public meeting. Bui left his homeland of Vietnam as a refugee in the 1970s, and after working for 25 years as a labourer – used all his savings (and time) to purchase and work in the restaurant. Bui and his family are in despair, and says if they take his restaurant they will have nothing left, and will not be able to start again and build a new place. Bui and local residents have a chance to stop the expansion of Shoppers Drug Mart at the public hearing Board of Adjustment meeting this Wednesday, December 21st at 5:00pm – City Hall. At the hearing, Shoppers Drug Mart will be seeking a conditional use permit needed to expand. Individuals are welcome to attend the hearing, or can send their comments to the clerks in advance of the meeting.

As a resident of the Village and someone keenly interested in urban issues, I did some investigation on the key issues at play here.

Commercial developments in Osborne Village must apply for conditional use permits if they want to build above a size of 5000 sq ft. This additional process helps encourage the variety and diversity of small business that this neighbourhood is known for. For example, in the square footage space that Shoppers will be taking over there should be enough space for 4, 5000 sq ft businesses, or 8-10 if each business had another on the second story (a process encouraged by the adopted Osborne Village Neighbourhood Plan).

Building under 5000 square ft ensures that big box, single use stores do not sprawl and take up large areas of the neighbourhood. This was also of great concern to residents when Safeway moved to the neighbourhood.

Businesses wanting to expand beyond the 5000 sq ft by-law, must apply to the City’s Board of Adjustment for a ‘Conditional-Use’ permit to expand. In the case of Safeway, the City felt that the service was needed to the residents and allowed for the permit.

Shoppers Drug Mart has already received a conditional use permit as they currently stand at 10,000 sq ft – so in my mind anyway, this seems contradictory to the established by-law if the store were to expand even further!

Many are concerned that this expansion limits the opportunity of three separate businesses and parcels of property, down to one.  Currently the land in question does serve as a restaurant, entertainment facility, and commercial retailer. By granting Shoppers conditional use, this expansion will limits the existence and opportunity for mixed-use and local business in the neighbourhood and turn the land-titles into one property.

Plans do not seem to meet the Osborne Village Neighbourhood Plan

Shoppers Drug Mart has wanted to expand previously but had proposed building a second story (a practice encouraged by the Neighbourhood Plan), they found it to costly and are now trying to spread out by purchasing the adjacent properties and increasing their square footage.

This is where this issue becomes contentious and a bit tricky – just because a commercial retailer will take a loss by building up, and just because the owner of the two adjacent properties is interested in selling – should the retailer be allowed to surpass the by-laws and neighbourhood planning policies that have been established precisely to prevent development in this way?

My feeling is that Shoppers will expand either way, but if neighbourhood planning policies and by-laws clearly prefer that they build up, and not build past 5000 square feet (which they have already doubly surpassed) – they should have to adhere to community needs, especially if they are expanding with the desire to serve the neighbourhood! The Osborne Village Neighbourhood Plan states that planning in the area should “Encourage a mix of day-to-day and special purpose shopping, dining, and entertainment services to meet the needs of village residents and visitors”.

It seems residents have been concerned about this type of development for some time as the neighbourhood plan also states that “The Osborne Street commercial core brings an energy and vitality to Osborne Village; however, the impacts of commercial activity and the potential for expansion into adjacent residential portions of the village is a significant concern for residents. Also of concern are the ongoing pressures from large format retailers to locate in Osborne Village in a manner contrary to the village’s valued urban form, diversity, and character”. So, who’s interests are they serving by expanding?

One question of many residents, and of myself, was what exactly the need was for the expansion? The large commercial retailer Safeway, next door also serves the purpose of Grocery and Pharmacy, and Shoppers already operates 24 hours per day – what more could one need? When asked, the consultant on the project told us the expansion was to add to the cosmetics department.

At the open house a map was displayed with all of the shoppers locations within 5km, there are 12! When asked if this was to show that expansion was not needed – I was informed that the map was to show that traffic would not increase in Osborne as a result of expansion.

This issue causes me a bit of confusion, as I would like to think that if a commercial retailer would like to surpass a by-law and Neighbourhood Plan – they should have to prove that their services are needed, shouldn’t they? How dire could our make-up needs be if the existing massive selection didn’t meet our needs, and the next shoppers is within a 15 minute walk?

This issue has brought up a lot of questions for me about serving the local economy. Movie Village and Vi-Ann are run by two individuals that live and serve in this city. They pay taxes here, they are successful, and they are Canadian.

So who own’s Shoppers? Is it your neighbour? Well, a quick search tells me that “In 2000, after Imperial Tobacco had been taken over by BAT Industries (formerly British American Tobacco), Shoppers was sold to a consortium of institutional investors including Kohlberg Kravis Roberts & Co. (KKR), Bain Capital, Inc., DLJ Merchant Banking Partners,Charlesbank Capital Partners, Ontario Teachers’ Pension Plan, CIBC Capital Partners, and Shoppers Drug Mart’s senior management and pharmacist/owners. Since then, the chain has gone public through an initial public offering.”

What are the economic issues at play here? How are we protecting our local business economy?

Moreover, what are the environmental issues at play here for the neighbourhood? If we were to take a baseline right now to measure the footprint, and a footprint after shoppers would expand, I can bet it would be a lot worse.

An expansion of the cosmetics section, means an expansion of cosmetics sales. This would increase a lot of waste, but also play impacts into environmental health and toxicity. See the Story of Cosmetics for details.

My mind is wondering all over the place on this one, tearing down perfectly good buildings, throwing away those building materials and using new materials to building an expansion? Getting rid of a business where people are now sharing movies?

Where are your thoughts on all of this? Please share them with us!