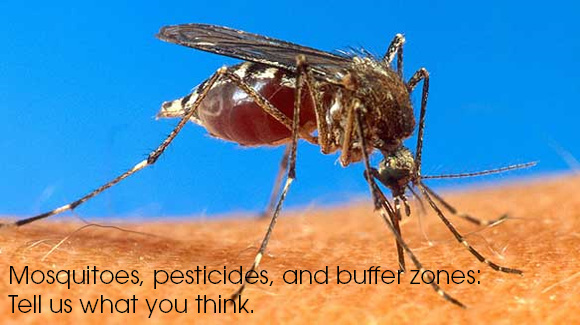 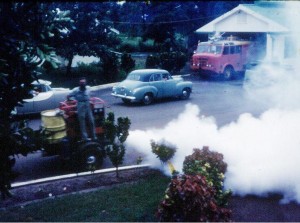 You may have heard this past weekend that the City of Winnipeg began fogging for mosquitoes. With the short notice, many residents had only one day to register for a buffer zone in person – and that is if they heard about it in time. This was the first time the City has had to fog with Malathion since 2010, and many people were quite upset by the short notice and inability to leave the city or prevent their exposure to the harmful chemical. If you do not want to be exposed to future fogging, it is important to be proactive and register yourself for a buffer zone. The buffer zone is 90 meters around your home, though the pesticide can travel to 300 meters, so it is still best to close windows to limit exposure.

This year City entomologist Taz Stuart will be piloting a new pesticide called Pryocide ULV 7067 which is a neurotoxin derived from chrysanthemum plants and a sassafras derivative. This Pyryocide is an alternative to malathion, but not enough was available to use during this period of fogging, though the City’s goal is to phase out Malathion by 2014. You can use Eliminate Ltd to help you safely get rid of those pest.

We thought you might enjoy this old gem of a blog post below written by Josh Brandon, who outlines a bit of history of its use in Winnipeg. You can also learn more about the harmful organophosphate insecticide Malathion here.

Every year, humans and mosquitoes both try to get out and enjoy Manitoba’s all too brief summer weather at the same time. No one enjoys the mix, but in recent years, the reaction in some communities has escalated.  Winnipeg’s Mayor Sam Katz has declared a war on the vexing, A. vexans.

Last year, the city of Winnipeg applied to make several changes to its annual pesticide permit.  Some of the changes they asked for will mean more toxic pesticides are sprayed more often.  Previously, three days of high trap counts were required before fogging commenced, now only two days are required, contrary to the best practices adhered to by the American Mosquito Control Association. 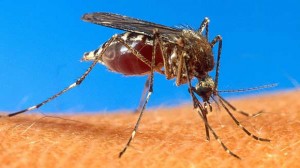 Even more ominously, some members of city council in Winnipeg have suggested eliminating or reducing pesticide buffer zones. Buffer zones are areas around the homes of residents who are concerned about the effects of malathion spraying could have on their families and neighbourhoods.  This year, planned changes to the size of buffer zones did not take place.  Green Action Centre, along with other community groups, successfully lobbied the City and Province to conduct scientific research to ensure that any reduction in buffer zones does not adversely affect residents or the environment.  So far this research has yet to occur, and the 100 metre buffer remains in place around registered residences.

In response, the city did make changes in the buffer zone application process, to make it harder to register for a buffer zone.  In the past, residents could phone or e-mail 311 to apply.  Now, the city requires residents to send in a copy of their signature and ID, requiring access to a fax machine, scanner or to mail in the application.

Allegedly, this move was made to reduce fraud on the part of anti-fogging activists claiming residences that were not their own. However, when I asked the city how common this type of fraudulent representation has been, they were unable to produce a single complaint or piece of evidence that this practice had occurred.  This is not surprising given that letters are sent to registrants confirming their buffer zone application – in other words a check against misuse of the system already existed.  Some people have suggested that the purpose of the new restrictions is to discourage people from sending in their buffer zone registrations.

In this case it is all the more important to show your concern about Manitoba’s overuse of pesticides like malathion by registering for a buffer zone.

If you do not have access to a scanner, e-mail me at josh@greenactioncentre.ca. Come by our office, and we can scan it for you.

Meanwhile full details of the process are available at the City of Winnipeg’s Insect Control Branch.