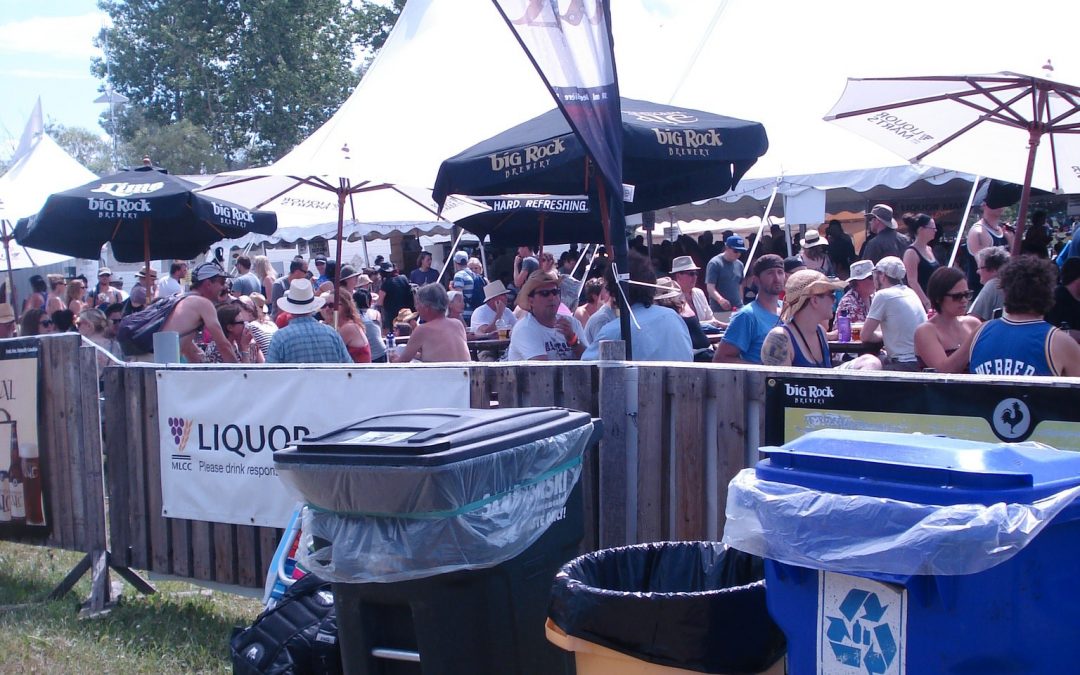 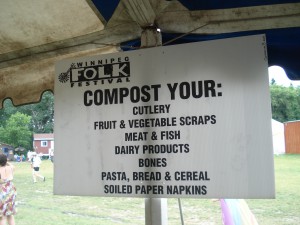 Hmm, what can I compost at the Festival? Just about everything!

If you made it to the Winnipeg Folk Festival, you would have undoubtedly noticed all the efforts being taken to make it a more sustainable music festival. So much so that Winnipeg Folk Festival received an honourable mention for one of the 2012 Manitoba Excellence in Sustainability Awards (specifically the Sustainability in Pollution Prevention and Product Stewardship Award). By the way, Green Action Centre was the winner for that category! 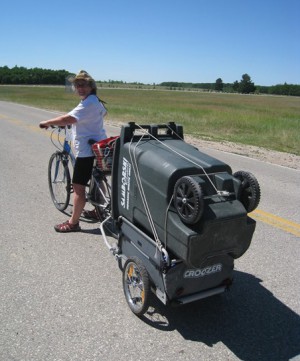 Green Action Centre staffer collects compost in quiet campground with her bike trailer and even returns the empty cart to the entrance at the end of the Festival!

The Winnipeg Folk Festival has been recycling for years, but this year practically every garbage bin was paired up with a recycling bin. There were also more compost carts out on the Festival grounds with signage to educate festival-goers that – yes, indeed – the disposable cutlery and cups were compostable, as they were made from plant materials. This year even campers in the Quiet Campground had their compostables collected – by bike!

On top of that, the Winnipeg Folk Festival has a unique reusable plate program that has been in place since 1997. Initially, the plates were being washed in Winnipeg but two years ago the Festival decided to have volunteers wash the plates on-site. This way they did not have to transport plates back and forth, further reducing their ecological footprint. Maybe the next step will be to start providing reusable bowls … ? 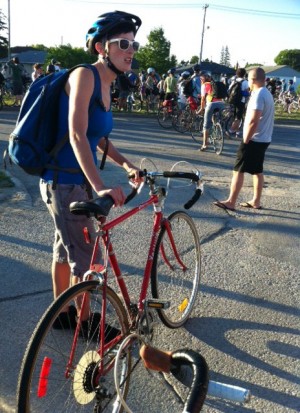 Leave the gear-carrying to the Festival van

The Festival also encourages patrons to choose an active or greener method to arrive onsite. For those who prefer and are able to bike to the site from Winnipeg, they organized group bike rides. The Festival also offered ticket holders a free ride on Winnipeg Transit buses from Downtown Winnipeg along with free transfers. Incredibly high demand meant some buses were so full that festival-goers had to wait for the next bus. Next year we’re hoping for even more buses!

Green Action Centre is also pleased to hear that the Folk Festival will be bottled-water-free next year. So don’t forget to bring your reusable water bottles and mugs in 2014!