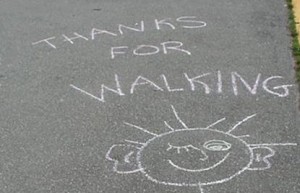 Montreal’s Urban Ecology Centre did exactly that as part of their Green, Healthy and Active Neighbourhoods program. Volunteers from the centre gave children in several Montreal communities cameras, and told them to photograph problem spots while on a neighbourhood walking tour. Next, children were asked to draw over these photos with their improvements for making their community safer and more attractive for cyclists and pedestrians.

From more trees, planters, garbage cans, bike paths, bike racks and benches, to added speed bumps and speed limit signs — the resulting ideas were not only quite functional, but insightful and creative as well.

Naturally, we wonder what our kids in Winnipeg neighbourhoods would draw, given a similar opportunity. What about in rural Manitoba?

Perhaps it’s time to find out. Let us know what you think!

Read more about what the kids have to say here.