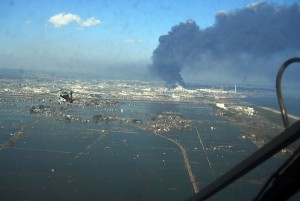 Sendai after the tsunami: Wikipedia.org

As the scale of the disaster in north eastern Japan becomes clearer, our hearts and thoughts are with the victims, the survivors and their families. The Japanese prime minister has called this the “worst crisis” in Japanese post-war history. Many Manitobans have friends or family in the region. We hope for their safety and well-being.

Today, we are also in awe at the power and force of nature. The 9.0 magnitude earthquake Friday shifted the main island of Honshu 2.5 metres eastward. The subsequent tsunami flooded up to ten kilometres inland. These events exceeded stringent Japanese earthquake codes. In the aftermath of the earthquake and tsumani, explosions have occurred at two nuclear reactors and several others have been shut down for monitoring. At present, the nuclear emergency remains classified as a “Level 4: Accident With Local Consequences,” according to the International Nuclear Event Scale. Favourable winds are blowing the radiation away from populated areas. However, the New York Times reports that the facilities could continue leaking radiation for several months. Meanwhile the disaster is far from contained and could well worsen.

This is a powerful reminder of the importance of the precautionary principle. With all our science and expertise, the forces of nature can always surprise us and overwhelm our capacity to cope and plan. It was with this recognition in mind that when the world gathered for the 1992 Earth Summit in Rio de Janeiro, that they declared that scientific uncertainty should not be a reason for inaction on the environment, “where there are threats of serious or irreversible damage”. The potential severity and irreparable harm caused by a nuclear disaster should make us rethink the use of nuclear energy in Canada and around the world.

The melt down at the Fukushima nuclear plant also reminds us of the fragility of even the most advanced societies’ technological infrastructure in the face of disaster. The backup systems meant to cool the plant in an emergency were supposed to run off the electricity grid that the nuclear plants were intended to power. The subsequent failure of secondary diesel generators has left authorities to implement a jerry-rigged makeshift plan with sea water and fire hoses. As with the Deepwater Horizon oil spill last summer, emergency measures are being improvised after all the fail-safes have failed.

The German environmental sociologist, Ulrich Beck, characterized modern civilization as a “risk society”. The predominant social conflicts of our age centre around our willingness to engage in practices for which risk is incalculable. Our economy, and its effects on the environment, is so all-encompassing that it no longer makes sense to measure the costs of potential failure in dollar terms. One of the characteristics of risk conflicts is that there is no clear basis on which to judge who is correct in their assessment and so these conflicts may appear irresolvable. On the other hand, the catastrophic and universal possibility of these risks means that we all have a common stake in their mitigation. The events in Japan this week underline the risks we all face when nature and technology collide.

The Red Cross has updates on the relief efforts in Japan.