Two hundred years ago, a change in the way people lived began to affect our atmosphere. It was called industrialization. First in England, then in Europe, the United States and Canada, people switched from making their own clothes, food, and other household products, to buying things made in factories. Most farmers and craft workers lost their way of life and had to work in factories to feed their families. 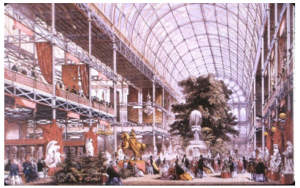 1851 Exhibtion in London. Many new marvels of industry on display.

The factories burned coal and sent more and more CO2 into the air. Then, hundreds of thousands of miles of railways were built. The trains burned more coal. Steamships circled the planet, bringing the factory products everywhere. People built bigger houses, filled them with factory products, and heated them with power that in many places in Canada and elsewhere still comes from coal. Eventually other countries like China and India became industrialized, but they are still catching up compared to the amount of stuff people in North America and Europe produce and consume.

In 1905, mass production of cars began. The cars used oil, another fossil fuel.

They became more and more popular around the world. Today, there are over 800 million cars worldwide, and they burn over a trillion litres of oil every year. That is a lot. And all that coal and oil we burn is changing how much carbon dioxide is in the air above our heads.

The last few decades we have also started producing food in new ways. Farmers use machines and artificial fertilizers to make food grow faster. These also send greenhouse gases into the air. More animals are grown in factories, producing

methane, another powerful greenhouse gas. Land is cleared for food. As forests and wetlands are replaced with fields, still more greenhouse gases are sent into the atmosphere.