Imagine if the tar sands were in Manitoba 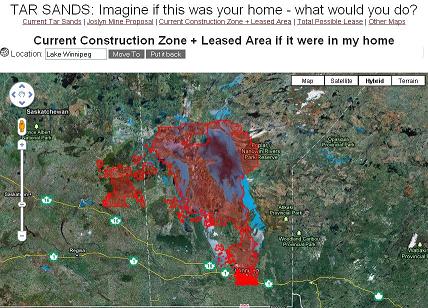 The Alberta tar sands are one of the largest industrial projects on the planet. As well as being Canada’s largest source of greenhouse gas emissions, they have transformed the once pristine boreal forest around them into a dead zone comparable only to the wasteland dreams of science fiction. The toxic tailings alone occupy 170 square kilometres, while the imprint of the area which could potentially be mined is the size of the state of Florida. Greenpeace has created an adjustable map that allows you to display what the size of the tar sands development would look like if it were in your neighbourhood. In Manitoba, the total leased area would encompass the entire lakes region, stretching to the south of Winnipeg, and sprawling west into Saskatchewan. If the tar sands were here, I would hope Manitobans would steward this environment wisely and not destroy our natural heritage for short term gain.