Highlights from Mayoral forum on the environment

It was a packed house at the Winnipeg All-Candidates Mayoral Forum on the Environment on September 30th. Over 300 people filled seats, sat on the floor, leaned against windows and walls, and hovered in doorways.

Richard Cloutier worked to keep the six mayoral candidates (Gord Steeves declined to participate) on topic and on time. However, long line-ups to address questions to the candidates, after the formal debate, left a handful of audience members disappointed when time ran out before they reached the microphone. 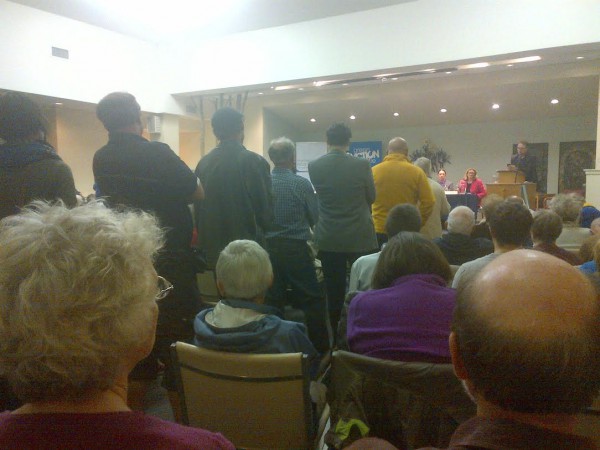 The following 3 questions were asked of each candidate for the formal debate:

What, if anything, would you do to encourage Winnipeggers to utilize alternative means of transportation, such as public transit, cycling and walking?

Would you be willing to shift more of the cost of transportation infrastructure from homes and businesses to vehicles, drivers and fuel? Recognizing that some solutions would require permission from the provincial government, what approaches would you recommend?

What would you do as mayor to combat the problem of urban sprawl?

If elected mayor, can you commit to meeting or exceeding the 2019 deadline to the North End treatment facility upgrades? How will you defend this significant expense in the context of competing funding priorities?

Transit turned out to be the hottest topic and a point on which the candidates worked to differentiate themselves. Lake Winnipeg and the Energy East Pipeline project also came up a few times in the audience questions.

If you weren’t able to be there, check out this video link [YouTube] for a recording of the forum.

For details on commitments from each of the Winnipeg mayoral candidates, check out their websites (in alphabetical order):