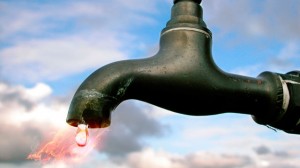 On February 3 and 4, the Manitoba Eco-Network is hosting the Reel Green Film Festival. The Green Action Centre is sponsoring the film Burning Water. It airs at noon on February 4 at the University of Winnipeg.

Burning Water chronicles the experience of the Lauridsen family from the hamlet of Rosebud, Alberta. In 2005, Fiona Lauridsen and her three children experienced chemical burns after showering in their home. Tests revealed high levels of methane and several man-made chemicals in their water. The family suspected that the water had been contaminated by natural gas extraction. Encana, one of North America’s largest natural gas producers, had recently begun hydraulic fracturing, or “fracking,” on the Lauridsen’s property.

Fracking is a technique used to extract natural gas from sedimentary rock, the most common of which is shale. Fracking involves injecting water, chemicals and sand underground at high pressure. This causes fractures in rocks below the earth’s surface to open, and natural gas—primarily methane—to be released. The gas escapes into a well, and can then be exported.

Greenpeace, DeSmog and others believe that fracking can contaminate groundwater. The process also uses large amounts of fresh water, and may release huge quantities of methane into the atmosphere. It has been said to cause landscape degradation and noise pollution.

Proponents of fracking often refer to natural gas as a “bridge fuel” or “transition fuel” that will help North Americans transition from foreign oil and coal dependence towards cleaner, more sustainable energy sources. Environmentalists like Stephen Leahy have suggested that switching to gas extracted through fracking will only speed up global warming.

Oil and gas industry leaders say that relatively few fracking wells have caused problems. However, earlier this month, fracking operations in Southern Alberta are suspected to have caused an oil well explosion over a kilometre away. Fracking is a common practice in Alberta and Saskatchewan. Geologists have recently stated that it may soon be possible to begin fracking in Manitoba.

Come check out Burning Water and consider the implications of this expanding, detrimental practice.