Electricity: how affordable is cheap? 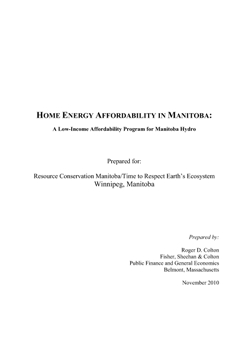 Manitoba Hydro has asked for permission to change electricity rates in this province. So far much of the media attention has been on the 2.9 per cent average rate increase that Hydro has requested of the Public Utilities Board. This average increase is somewhat greater than anticipated inflation, but would still leave our province as one of the cheapest electricity jurisdictions in North America. But is hydro-electricity affordable?

A report commissioned by Green Action Centre and TREE (Time to Respect Earth’s Ecosystems), Home Energy Affordability in Manitoba: A Low Income Affordability Program for Manitoba Hydro, attempts to tackle this question. The report was authored by North America affordability expert Roger Colton. On the basis of his analysis and recommendations, we argue that Manitoba Hydro has an opportunity to make ground-breaking policy that truly builds social, environmental and economic sustainability into electricity pricing.

For an environmental organization committed to social justice, increasing electricity rates presents a challenging dilemma. Environmentalists have often argued that energy prices need to include the full cost of energy production and consumption, including costs to the environment that are borne by future generations or by marginalized communities. Greenhouse gas emissions, flooding from hydro-electric dams, and destruction of wilderness for hydro lines are just a few of the externalized costs that rarely figure in our hydro bills. Energy economists calculate that, in keeping these costs off the books, power companies promote wasteful use of energy. A recent study in Ontario found that a 10 per cent reduction in electricity price could result in the consumption of an extra 1.9 million MWh of electricity. From an environmental perspective, increasing rates makes sense.

Unfortunately, we live in an unequal society, one which is becoming more unequal – partly as a result of the pressures caused by environmental degradation. Even at current low rates, thousands of Manitoba households face crushing Hydro bills. For more than 8,500 Manitoba families with incomes of less than $10 000 per year, energy bills can eat up to 60 per cent of available income. A further 60 000 households face energy bills greater than 6 per cent of their income. Low income households are often the least able to make expensive renovations to enable them to participate in energy conservation programs. As a result they are often the least able to adapt to energy price increases. The situation of these households must be taken into account in any policy that attempts to achieve sustainability goals.

Manitoba is in a uniquely fortunate position to develop policy that will address social and environmental sustainability goals. Manitobans benefit from low energy prices partly because our vast water resources give us access to power that is cheaper to produce than almost anywhere in North America. This already cheap power is made available at even lower rates to Manitobans because we benefit from export sales to the United States, Ontario and Saskatchewan. Revenue from these exports is currently used to keep rates as low as possible for all Manitoba consumers, including residential, commercial, and industrial power users. Our cheap energy undermines our province’s commitments to conservation, while doing a poor job at meeting equity goals. In fact, to the extent that higher energy bills often correlate to larger home sizes and higher incomes, these subsidies are regressive and benefit wealthier Manitoba families.

Green Action Centre argues instead that at least some of the proceeds from our exports could be used to support a low-income energy affordability program that would give all Manitoba families, regardless of income, the opportunity to keep their energy bills affordable. A Low-Income Affordability Program would enable Manitoba to build a unique program to help conserve our environment while benefiting all Manitobans.