“Do not forget us”

(The views expressed in this blog posting are those of the author and do not necessarily represent Green Action Centre). 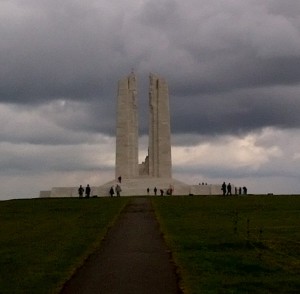 Last week I had the privilege of tagging along with my husband, Joel Ralph, Social Media Manager at Canada’s History Society, as he travelled to Vimy Ridge with EF Educational Tours for the 95th anniversary of the battle of Vimy. The week-long tour began in London, U.K., at a ceremony involving 1,500 Canadian students marching from Horse Guards, through Canada Gate into Green Park. From London, it was on to Beaumont-Hamel, one of five “caribou” memorials marking the losses suffered by the then Dominion of Newfoundland. Next on to Menin Gate, a war memorial in Ypres, Belgium, marked with the names of 60,000 British and Commonwealth soldiers from WW1 whose graves are unknown. Finally, the week concluded with a full day at Vimy Ridge, the hauntingly beautiful Canadian war memorial dedicated to Canadians killed in WW1, again with no known burial. Over 5,000 Canadian students were in attendance at Vimy on Monday, April 9, 2012. 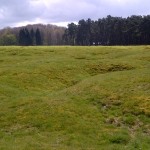 As an environmentalist and a pacifist, I had some misgivings about this trip. Indeed, we visited towns and cities that had been bombed beyond recognition in WW1. We looked out at the landscape around Vimy, where the entire area had been preserved and was covered with large ridges, valleys and crater holes – poignant reminders of the lasting effects of war. We visited cemeteries with thousands upon thousands of soldiers’ bodies buried below. The social, environmental and financial costs of this “war to end all wars” is truly incalculable.

Regardless of my personal views on war, whether I believe a nation can be born on a battlefield, whether I agree that honour and valour are earned through misery and bloodshed; I recognize now that I had been missing the point for all of these years. As a light 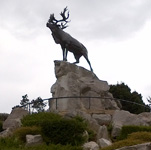 rain fell on the “caribou” atop the hill at Beaumont-Hamel, I distinctly heard the angry call from soldiers now long gone: “Do not forget us.” And later, as a harder rain fell on Vimy, I recognized this not as a place of peace, but as a land that had seen incredible violence and pain, and it called out to me and to everyone there: “Never again.” 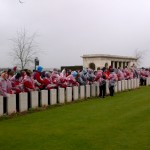 What positive message can I offer from the site of such historical violence and tragedy? Peace and positive change are truly in our hands. Our own positive actions, whether small or large, at a personal, community, national or global level, are so important. My own personal action this spring? I will be expanding our backyard garden and learning food preservation alongside our two-and-a-half year old son. Do you have a personal action you would like to share? I would love to hear your plans.