Composting at the Winnipeg Folk Festival 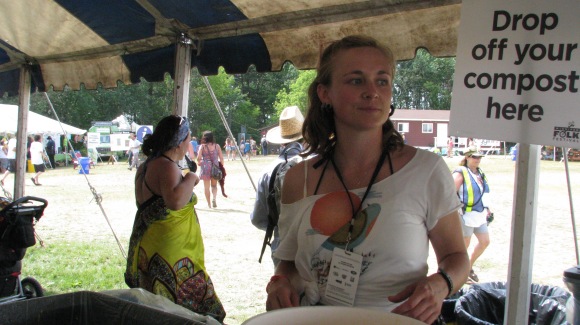 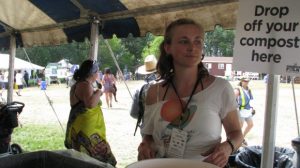 Green Action Centre and the Winnipeg Folk Festival teamed up again this year to lead the composting program at the festival. Master composters, Green Action Centre staff and other volunteers worked with festival goers, volunteers and performers to divert 15 thousand kilograms of compostable food waste at last year’s festival. This year, with an expanded crew, the early results show that we were even more successful than ever. The composting crew had teams working backstage, in the campgrounds and onsite to help make sure as much food waste as possible was diverted from landfills. 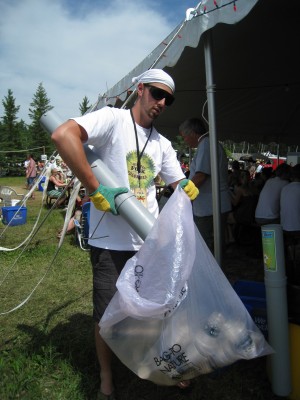 In recent years, “cupsucker” has become part of the lexicon of the Winnipeg Folk Festival. One of the jobs of the compost team is to train people drinking in the taverns areas to look for the long cupsucker tubes and to not throw their beer cups in the garbage. The grey tubes can hold 138 beer cups and the cups are made of corn-based compostable material. Saturday afternoon, with the weather warm and the taverns full, the crew had many cupsuckers to empty. Every time we tip one of into our bags, it a valuable resource we are protecting, so we didn’t mind if a little stale ale dripped on our legs from time to time.

Backstage, over 3000 volunteers and performers lined up for meals three times a day. With almost ten thousand meals each day, there is a lot of food scraps. Fortunately, the kitchen (La Cuisine) has almost entirely eliminated non-compostable material from most meals. The compost team’s job is to ensure that everyone scrapes their plates clean into the compost bins and to relay the plates back to the kitchen for cleaning. Occasionally, plastic butter cups or yogurt containers were added to the mix. A few had to be dug out of the bottom of the container, but mostly people did pretty well at learning the intricacies of avoiding waste stream cross-contamination.

Another important part of the job of the compost crew is education. It is crucial that we keep the message of composting going beyond the festival. There were even volunteers working with children teaching the basics of worm composting, or sometimes just playing with dirt. We hope some people will be inspired to start composting at their own home and office once they have seen how fun it is. 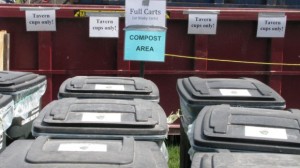 Diverting so much food waste has helped the Winnipeg Folk Festival become a leader in sustainable event organization. The Winnipeg Folk Festival’s compost program was cited by the Icarus Foundaton as a case study example of green festival organization. All the material we collected was sent to Sambourskis, a large scale composting facility outside Winnipeg. Diverting 15 tonnes of compost waste can help reduce almost an equal amount of greenhouse gases. It keeps materials out of the landfill and provides important nutrients for gardens and farms across the region. It’s a small piece of doing our part, and this year, Winnipeg Folk Festival is leading the way.