Cities are for People, not Cars

Jane’s Walks are an annual event where people are invited to explore neighbourhoods in the spirit of Jane Jacobs. Jane was an urbanist and activist, first in New York City and later in Toronto. In both cities, she was instrumental in leading opposition that succeeded in stopping construction of new freeways through established neighbourhoods.

Without any formal planning background, she pioneered groundbreaking theories on how cities function and thrive. She saw that the most successful and thriving neighbourhoods had lots of people around to provide eyes on the street and create welcoming environments. Freeways, parking lots, and other car-oriented infrastructure creates uninviting dead zones. The ideas laid out in her 1961 book “The Death and Life of Great American Cities” have been instrumental in shaping modern urban planning. 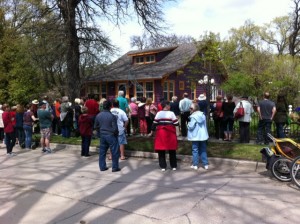 Last weekend, I went on a Jane’s Walk for the first time. There were 15 walks to choose from in Winnipeg, including the Exchange District, Riverview, Transcona, and St. John’s. Walks were also held in over a hundred cities across Canada and around the world.

The concept is simple: people gather to walk around a neighbourhood, learn about it, and appreciate it in a new way. The people leading the walks are residents with a love for their community, and everyone is encouraged to contribute to the discussion. It is an opportunity both to explore new places and to better appreciate the places we already know. The most interesting places are those with a rich history, and I heard stories of a former creek, gambling den, and buried gold!

You can also check out some of the pictures and videos from Jane’s Walks in other cities, with more to come.

I encourage everyone to get out and participate in a Jane’s Walk next May!