Cap and Trade for Manitoba? 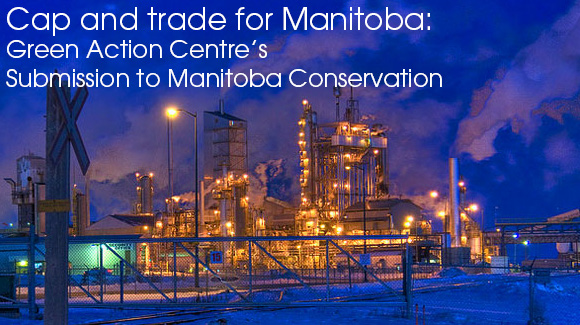 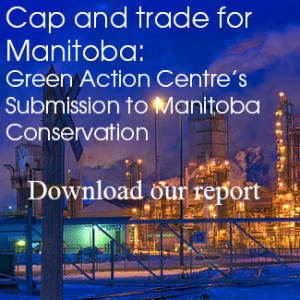 Climate change is one of the most urgent problems facing the planet today. Addressing global warming will require every sector of society to make changes. Rich and developing countries will all need to curtail their emissions, with wealthier societies like ours taking the lead. Consumers need to be both educated and motivated to change their behaviours. Corporations and businesses of all sizes will need financial incentives to make the investments needed to build a sustainable economy. Some of these adjustments will have costs, but the costs of inaction are greater still.

Green Action Centre submitted a report to Manitoba Conservation as part of the province’s cap and trade consultations.  Cap and trade is one of the tools often put forward to encourage reduced greenhouse gas emissions. Cap and trade is a market-based system that could play a small role in helping to reduce greenhouse gases in Manitoba, but only if it is properly implemented. With the wrong policy choices, cap and trade could be an expensive distraction that facilitates increased emissions across the region.

What is Cap and Trade?

Under a cap and trade system, government regulates the biggest polluting industries and creates a cap, or maximum limit of greenhouse gases, for the regulated industries. Manitoba is a member of the Western Climate Initiative (WCI), a group of provinces and US states working together to reduce greenhouse gases.  The proposed WCI system for Manitoba would cover all facilities that emit more than 25 000 tonnes of greenhouse gases annually. Approximately eighteen of Manitoba’s biggest polluters would be regulated under the proposed system. Collectively these facilities are responsible for over 2 million tonnes of greenhouse gas emissions, or at least 12% of Manitoba’s emissions. A cap and trade system could see that amounted capped and reduced each year to bring emissions in this significant sector under control.

Although the total emissions would be reduced, each industry has flexible options for compliance with the regulation. Under cap and trade, industries can trade permits with each other so that those industries that are able to make large emission reductions can benefit by selling their surplus permits to those that have difficulty cutting greenhouse gases. For example, if the cap is reduced 10 percent, not all industries would need to cut their emissions equally. One facility may be able to shift to running on renewable energy and reduce its emissions by 15 per cent. Another, despite making expensive efficiency investments only cuts its emissions 5 per cent. The first facility could sell its excess permits to the second facility. In theory, emissions could be reduced through cap and trade with minimal economic disruption.

Whether cap and trade is effective in reducing emissions depends on the details of the system. Potentially, we show that cap and trade could help big polluters in Manitoba cut over 700 000 tonnes of their annual emissions between 2012 and 2020. This could be an important step in Manitoba reaching a goal of an overall greenhouse gas reduction of 15 per cent compared to 1990 levels. Under a worst case scenario, Manitoba’s participation within the Western Climate Initiative could allow greenhouse gas emissions across the region to increase. Careful consideration of policy alternatives are needed to ensure that cap and trade is effective and efficient at reducing greenhouse gases.

Will Cap and Trade help reduce greenhouse gases in Manitoba?

One of the biggest concerns about cap and trade for Manitoba is that it targets only a small percentage of Manitoba’s emissions. In some jurisdictions, the biggest polluters make up more than half of total greenhouse gas emissions. Across Canada, facilities with over 100 000 tonnes of emissions make up 36 per cent of total emissions. In Manitoba they make up 10 per cent. This means that in Manitoba other initiatives must play a bigger role in reducing emissions, particularly to tackle emissions from transportation and agriculture.

1) Manitoba should align its greenhouse gas emissions targets with internationally accepted science and aim to become close to carbon neutral within 40 years.

3) Manitoba should support diverse efforts for reducing greenhouse gas emissions and shifting to a more sustainable economy. Cap and trade may be among the tools adopted in Manitoba, depending on the details of the program.

4) Cap and trade should be integrated with other carbon pricing mechanisms and greenhouse gas reduction policies.

5) GHGs produced from natural gas and transportation fuels could be brought under cap and trade by requiring the importers of fossil fuels to Manitoba to possess GHG allowances sufficient to cover the combustion of these fuels.

6) For those parts of the economy for which cap and trade is not feasible or cost-effective, an alternative form of carbon pricing such as a carbon tax should be implemented.

7) Early reduction allowances must not be granted to industries that would have reduced their emissions as a result of regulation or economic conditions aside from cap and trade.

8 ) Capped emitters should reduce their emissions during the 2012-2020 period at a rate at least consistent with Manitoba’s economy-wide emission reduction target. If other carbon pricing mechanisms are not implemented, the reduction share of capped emitters will need to be higher.

10) All greenhouse gas emission permits of should be distributed by auction.

11) Money from the auction should be used to implement climate change strategies, including funding for demand management, education programs, public transit and climate adaptation. Money left over could be distributed to tax payers.

12) Because of scientific uncertainty and the regulatory difficulties of offsets, more research should be conducted to ensure that offsets actually amount to additional verifiable reductions before offsets are included within the cap and trade system.

Why do we need to reduce greenhouse gases?

By burning fuels like coal and oil, industrialized countries have released billions of tonnes of carbon dioxide (CO2) into our atmosphere. Deforestation and industrial agriculture have added more greenhouse gases. These gases are changing our climate. Our planet has already warmed about 0.8 degrees Celsius over the past century. The rate of warming is accelerating. Unless we change course, rising sea levels, global food shortages, mass extinctions, and conflict over scarce resources will spell crisis for humanity, our civilization and the planet.

Other organizations that have submitted to Manitoba’s Cap and Trade consultation include: