Canadian youth apologize to Africa and the world

“We are truly sorry for our government’s stance on climate change” – open letter in The Mercury, Durban, South Africa. 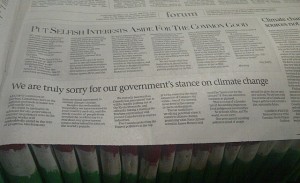 In a turn of good old-fashioned Canadian manners, the Canadian Youth Delegation is publicly apologizing for a problem they didn’t create. This morning an apology letter by the Canadian Youth Delegation, was published in The Mercury, a Durban daily newspaper. The letter cites irresponsible Canadian policies, such as Environment Minister Peter Kent’s declaration to defend the tar sands at the COP17 climate negotiations and Canada’s recent rejection of the Kyoto Protocol.

Furthermore, the Mitigation Working Group of YOUNGO – the official youth constituency to the United Nations climate change negotiations I am involved with attended the plenary session for further commitments under the Kyoto Protocol. We worked long hours last night to draft the youth intervention for the plenary session to bring our voice to the table reminding negotiators that the Kyoto Protocol is the only legally-binding agreement we have and needs to be kept alive.

Just before the Youth intervention the Africa Group and Alliance of Small Island declared “clear and loud that it will not let African soil be a graveyard for the Kyoto Protocol […|nor accept an agreement which does not include more ambitious targets for developed countries.” Groups stated that countries who are leaving the Kyoto Protocol are not doing this because they want to do more but because they want to do less.

Again Canada was awarded first place Fossil of the Day for proposing “eventual solutions” for “urgent problems.” Canadian environment Minister, Peter Kent, said yesterday to media that: “There is an urgency to this. We don’t need a binding convention, what we need is action and a mandate to work on an eventual binding convention.” What can I say? He nailed the first half of the sentence!

Watch Kluane (18) from Victoria, B.C. addressing the plenary on behalf of the global youth constituency.